I'm not doing very well at this blogging lark. It seems my last post was in 2019. A lot has happened since then but it really is no excuse for somebody who spends much of his time writing for a living; or maybe that is the problem. Too much writing and too little painting and gaming.

In summary, 2019 saw the continued growth of my 6mm Vietnam project and also in 20mm with the inspired idea on the run up to my birthday (a bit before Christmas) in that if I asked everybody who is usually kind enough to buy me a present to consult a list of desired items it would stop the usual donation of something that I'd never use and be destined for the charity shop some months or years later. So my decision was for a 20mm US Vietnam Fire Support base from Grubby Tanks.

I have enough base defences to make a FSB about 3'x3' and quite a lot of buildings for inside the base and villages outside. Razor wire is another matter, however.

We ran two games over the weekend - one was the standard 'downed helicopter' and rescue the aircrew before the VC/NVA could get to them and the second was an infiltration to an unfriendly district in search for a senior NVA officer who was rumoured to be in the area. This has a sub-plot of the officer having been cut off during a US air attack on a village and the officer having to make it across the table without being seen and killed. This was done by hidden movement and me acting as an umpire for both games.

My 6mm output continued and we even had a US company level game at the club one Sunday. We used the rule set From the Delta to the DMZ with great results. We knew we got some things wrong and will rectify that at some future point.

February 2020 saw my last l'Arte de la Guerre competition game until Novemner 2021 due the Covid pandemic. I had quickly cobbled together a Sicilian Norman army and got stopped on each game as my medium elite knoghts were just no match for the heavier metal being fielded. It was a good fun weekend in Plymouth enhanced by a friend of mine from Chicago was able to meet me down there. Beer, rugby, curry and gaming made for a memorable weekend.

l'Arte de la Guerre v4 was released in 2021 and my armies keep expanding in size as well as nations. The lockdowns meant I had more time to paint as I was not leaving the house for work. I have been fortunate to work right through the various lockdowns and the extra time saved travelling meant I could paint up extra units and finish some armies off so I had more choice and start on some new ones.

Palmyrans have been expanded, Ghaznavids have appreared in 15mm form and 28mm Classical Indians have doubled in size so I really do have choices and not just the army I took to Warfare in 2018.

The expansion of the Indians was to compete at a small competition in the Devon seaside town of Brixham. Not somewhere I had been in about 50 years but I won't be leaving it that long again - not that I have 50 years left of life anyway! The Devonian Seaside Classic was organised by Tim Porter aka the Mad Axeman. It was a great weekend away and not a complete disaster for my Indians and a surprising 36 competitors who came from London, the Midlands, across the SW and one player from Finland!

In preparation for the weekend a fellow club member had asked for a practice game (a form of cheating in my opinion) but I obliged on the understanding that I would have to subsitute figures as he only plays in 15mm and my Indians are all 25/28mm.  Hittite chariots, Ghaznavid cavalry, Sumerians and a few actual Indians came together to provide an opposition to Hannibal's Carthaginians.

I won't bore you with the game details but my Indians had an incredible run of luck at jus the right moment and won the day. 2 weeks later another friend wished to practice with his Late Romans so he came to the club and faced off the Carthaginians - but not for long and his army was broken in enough time for him to have a second game against my Indians. Another wind for the Indians, so guess who has been building another Classical Indian Army? The first competitive outing will be in Oxford on 15 Jan 2022.

My next painting adventure is for a l'Arte de la Guerre competition in Bournemouth over the weekend of 12/13 February 2022. It allows for any army post 1071 AD until the end of the rules period. Having learned my lesson in Plymouth about Heavy Knights I have just started prepping an Italian Condottieri Ventian army. All I need to do is paint 2 figures a day - it's 3 January and I am already 3 days behind on the painting schedule. However, I have managed to assemble the Perry's plastics I will use for most of the army. Fortunately I have box loads of them for an abandoned Wars of the Roses project.

I may be 3 days behind on the painting but all these are now undercoated and ready to go and I even found some painted bowman that I can use so maybe I have caught up with the painting with that find?

Today I had a catch-up morning to flock and base a number of figures that have been finished for some time; 28mm ancient Indians, 15mm Middle Imperial Romans, 28mm Normans and the first two companies of 6mm Americans for my Vietnam project.


The next company is nearly finished and will be ready for basing soon. I have also completed some civilians and made a start on some M113s and mortar teams. The PBRs in the background are almost finished too. All figures are from Irregular Miniatures. 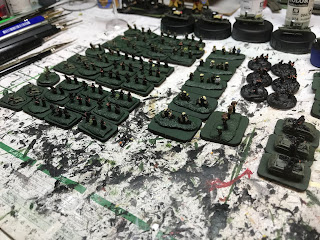 I love the smell of Bostick in the evening

After another day caring for my 90 year old dad, I am having an hour to myself to get a stalled project back on line.
If all the stalled projects were put in line I dare say I would have had enough money to buy a week's holiday in the sun; not that I have had the time or opportunity for a holiday in the sun for ages.
The project that I wish to get moving on is for the Vietnam War.
Being a wargames butterfly - no that is the wrong image completely - more of a Death Head Month being drawn to the light, I have had an idea at the back of my mind for a long time. It has involved painting Vietnam figures in three different scales - 6mm, 10mm and 20mm. And of course no army is yet finished.
So today, the Bostick, magnetic sheets and mdf bases have come out and progress is being made. 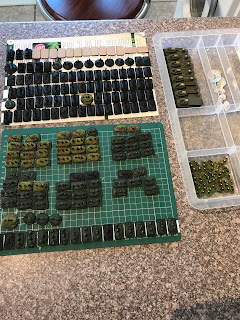 All figures have come from Irregular Miniatures 6mm Vietnam range. They are robust figures cast onto a base that is of an irregular shape. They don't have the detail of some makes but at 36" away it makes little or no difference.
After some consideration I have decided to use half size Flames of War bases, mostly as it makes storage so much easier. It has meant a fair bit of trimming of the metal bases.
Despite the decision to use the FoW type bases it is not my intention to play the Battlefront 'Nam rules. In fact I have been collecting Vietnam rules for decades and each has its own merits. However I have certainly not found anything that is a one size fits all - or more to the point three sizes fits none that can be used for them all.
I have more in mind a series of campaign style games where different activities or types of action may be played in any of the three scales I have. 20mm for small scale skirmishes, 10mm for company actions and 6mm for much larger games.
Recently I discovered Tacspeil - The American Army's wargaming rules for the Vietnam War 1966. This book is published by John Curry and the History of Wargaming Project. 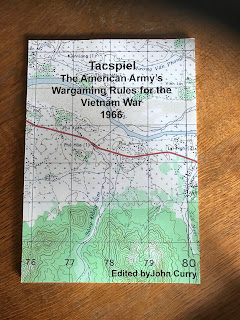 The rules themselves are complex and not ideal for my purposes but they are rich in information that can be adopted for a simpler campaign system.

One of the joys of rummaging around the Irregular website was the discovery of PBRs in 6mm. I have bought several to go with my Amphimods brown water navy vessels. This gives me the chance for a true tri-service campaign that I can put on the tabletop. 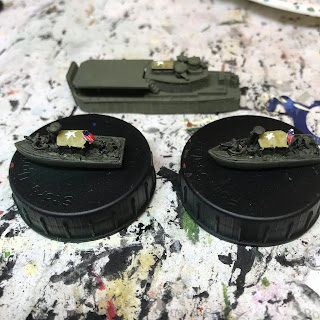 I am making steady progress and will provide updates soon.
Posted by Philip_Mackie at 11:23 No comments:

Posted by Philip_Mackie at 02:39 No comments:

I recently decided to spend a bit of time making woods for my 15mm l'Arte de la Guerre games in a new way. I have seen many variations on the theme and decided to have a go myself.
I set the following up as a pdf but cannot find a way of including that on here so have converted the three pages to hires png files. 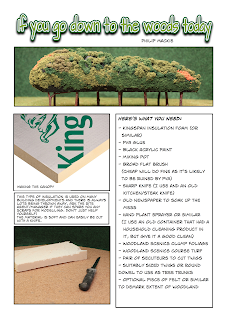 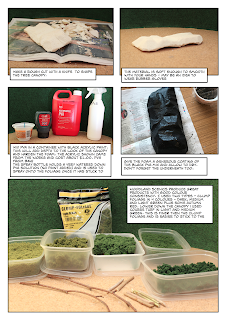 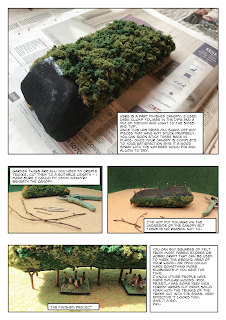 Posted by Philip_Mackie at 09:45 No comments:

I was looking to test some new video software and decided to use some of the photos I took at Godendag.

Posted by Philip_Mackie at 09:21 No comments: